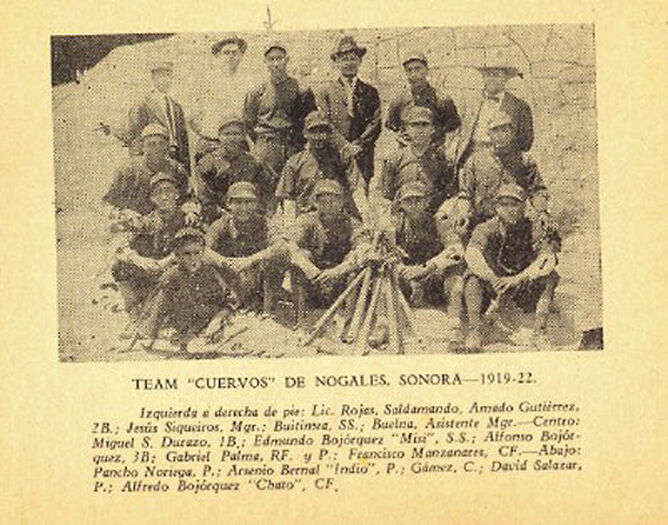 Not everything is life and sweetness in this world; we know that everything happens, leaving indelible memories, some sad, others bitter. But all the same, memories!

The tragedy of the Los Cuervos nine is of the type that leaves bitterness. While the Los Cuervos baseball nine (*1) were getting ready to leave for Mexico City where they were to contend with the most powerful teams of the Beautiful City of Palaces, they called up other players for reinforcement, included among them, David Salazar, superb Mexican-Californian pitcher who was having the best season of his life; Amado Gutierrez, the great second baseman from the White Sox out of Douglas, Arizona, who had been pitcher for the great Cananea team; Gamez, catcher from the same team, so they could accompany the Cuervos.

On the afternoon that they were attending their last practice, a strange thing happened: while El Indio Aresnio Bernal was at bat, Alfredo Chato Bojorquez, captain of the team, dropped by the field accompanied by other friends of his, riding in a Studebaker: moments later Arsenio's bat broke in such a strange way, that it seemed as if it had been chopped by a mighty blow from an ax. (Someone said that it foretold a bad omen). The practice ended, and what to the surprise to the Cuervos, when they arrived at the center of town, where from all quarters was heard the sad news that Chato Bojorquez had just been killed! The car in which he and his friends had been riding, had rolled over several times on a very sharp curve near Nogalitos heading toward the Washington mine.

None of the players wanted to believe that type of news. But unfortunately it was the sad reality! The captain of the Los Cuervos team had died!

This unfortunate event occurred the 22nd of June 1920, about seven o'clock in the evening, and the Cuervos had planned their trip for the 24th of the same month. But in that month, yes, burial was given to the great Hermosillan player. On account of this the Cuervos trip to the capital was suspended and with this unhappy event the Los Cuervos star begin to decline.

Amado Gutierrez has been featured with his teammates in other articles on both sides of the border. His sports prowlness is legendary in the Douglas/Tucson area of Arizona and the Nogales area of northern area of Sonora, Mexico.

In an article written by Tom Danehy in Sports Illustrated April, 16, 1984 issue, the writer describes a heroic semi-pro game played over 83 years ago on May 29, 1921, which pitted the Douglas White Sox against their arch rivals Nogales, Arizona Cuervos (Crows). Both teams coming into the game undefeated. The White Sox winning their first 12 games of the season, mostly against competition from the state of Sonora, while the Cuervos' 19-0 record was against California and Arizona teams proved to be a show down. The game was to be played in the border town Nogales 10,000-seat municipal stadium on the Mexican side of the border.

The pageantry, the excitement, and the honor of each town was at stake. Thousands of fans from all over Arizona and Sonora came to see the game in Nogales. (Nogales, Arizona is a border town with its sister city, Nogales, Sonora, Mexico. A border fence is the only distinction between the two cities. Other good examples of communities are El Paso/Juarez, San Diego/Tijuana and on a much smaller scale Calexico/Mexicali.) The governor of Sonora attended the game, being protected by the federales and to allay fears that Poncho Villa would not surprise and attacked the game.

The game started at high noon, with the temperature over 100 degrees. The crowd already intoxicated with excitement was also in the party mood since Prohibition was not recognized in Mexico. Predictably, there was heavy betting going on. Some say thousands of dollars and hundreds of thousands of pesos were wagered at even money between the crowd. "The game quickly settled into a pitching dual between Tachi Ruiz of Douglas and Arsenio (Indio) Bernal of Nogales. The two traded strikeouts and both had no-hitters through the fifth inning. The 20,000 fans who had squeezed into the stadium roared with each pitch and bet some more between each innings. It became increasingly apparent that the game's outcome would probably be determined by one big play."

"Bernal began to tire in the late going but he maintained his shutout with the help of some fine defensive plays and generous calls by the local umpiring crew. The teams battled into the ninth, still scoreless tie. Ruiz lead off the inning for Douglas with a line drive to left that got past the fielder and bounced to the wall. Ruiz slid into third well ahead of the throw. His slide, however, dislodged the bag and sent it skittering into foul territory. Ruiz, breathing hard from exertion, sat slumped over on the spot where the bag had been. The relay throw finally came in to the third basemen, who casually tagged Ruiz where he sat. Immediately, the home-plate umpire who had moved about halfway up the line, raised his right hand and loudly called Ruiz out."

The White Sox team and manager could not believe the call. They pleaded their case with the umpire to no avail. Some Douglas fans, upset that losing was one thing, felt their money was being stolen, jumped onto the field in disgust. Not wanted to be left out, Nogales fans, did the same. Finally, upon orders from the governor, the federales fought their way on the field to restore order. Gunshots were fired and the crowd began to stampede in all direction. A riot broke out that afternoon. "Just as suddenly as the panic began, it ended. The passion was spent, the fighting was over. ... The 'out' call against Ruiz stood, as did his ejection. The Nogales team retook the field and the game picked up with one out in the visitors' half of the ninth inning. Unsettled by the violence and perhaps by the bloodstains near the mound), Bernal walked the next two batters before getting the second out of the inning on a called third strike. That brought to the plate Douglas cleanup hitter and second baseman Amado (Chief) Gutierrez."

The pitcher Bernal appearing to have regained his control had to face Gutierrez. A quick out and the Nogales team would win the game. Bernal threw his first pitch, a curve for strike one. Bernal took his wind up and threw the second pitch. Sorry to say it was over the plate. Chief Gutierrez hit the ball over the centerfield wall for a three-run homer. Bernal got the next out, but the "Chief" took the mound in the bottom of the ninth to preserved the victory for the Ruiz and the White Sox.

The article goes on to describe the heroic efforts of Amado Gutierrez in his baseball career. Amado Gutierrez played for several teams from Marshall, Texas to Sonora Mexico. World War I broke out and interrupted several baseball player's playing days. He returned to play several more years, including the stint from the article on the Tragedy of the Los Cuervos. His playing days ended, but his life began by working for the railroads in the Douglas-Agua Prieta area. He married and settled down to have four sons and three daughters. Plaques of his baseball deeds are still viewable at the local Agua Prieta Stadium. In fact, the stadium was going to be named "Chief Gutierrez Stadium"; however, the politician of the town named the stadium after the governor of Sonora instead.

Research of this ancestor has been difficult. We have several individuals with the same name with three distinct birthdates given! We think we found the correct one, from his military/draft record, another for his railroad service, as well as his immigration records. We do know that his heritage lead to Ciudad Jimenez, Chihuahua, Mexico based upon records found from other family members.

We were able to traced down some undocumented vital records from the local area. We found original vital records being stored haphazardly in someone's barn. Some are in the walls, providing insulation. Members of Familia and or Latter Day Saints genealogy researchers are in communication trying to preserved or duplicate records, which could be lost forever.
Douglas Team Photo - below 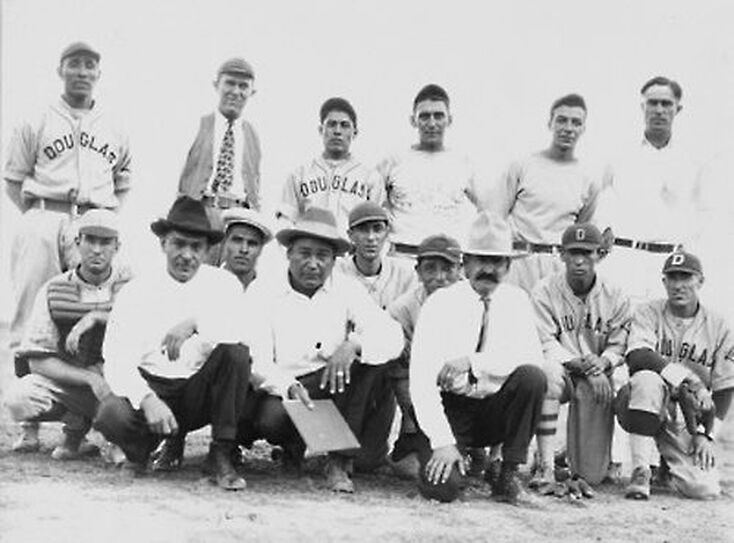