History of the Organization 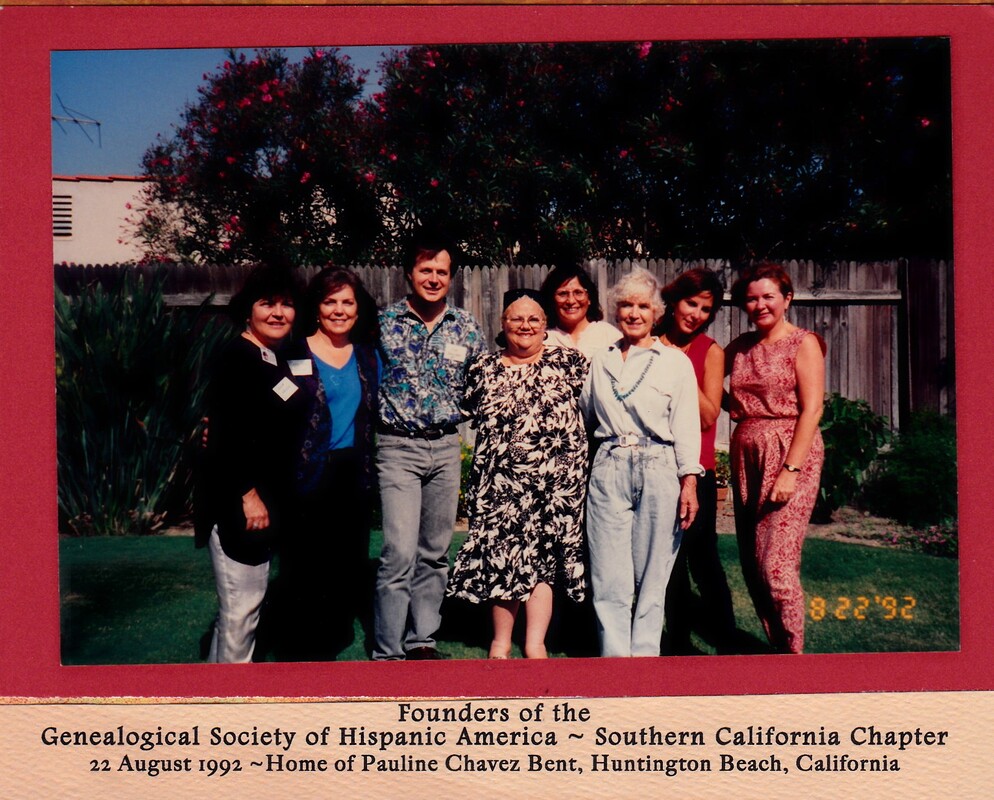 Pauline contacted GSHA in Denver, hoping it would welcome our affiliation. GSHA said “yes” and GSHA president David Salazar and his wife Mary officiated at a special "installation" ceremony in 1992 held at the El Torito Restaurant in Placentia, which marked GSHA-SC’s connection as a branch of GSHA. We passed the hat to get funds to file California incorporation papers (that’s why there are only 16 founders; we were the only ones with checkbooks or cash that day!). Twenty-two years later most of the founders have moved on to other groups, other interests or have passed away. Founders who are still members include: Mona Hernandez, Donie Nelson, Margaret Roybal, Joe Sanchez III, and Gloria Trujillo. Deceased:  Pauline Chavez Bent, Sharon Heinz, Janice Luna, and William & Emma Trujillo.

Pauline was adamant that we had to have an event to attract more members, so Pam Lopez and Julie Candelaria contacted the Santa Fe Springs Library, which not only offered space for our event, but our first real home: a place to meet and store our reference library collection. In May 1993 we held our “big event” and hosted our first booth at the Southern California Genealogical Society (SCGS) Genealogical Jamboree. Julie and Sharon made our first banner and for the first time we sold Chavez’ Origins of New Mexico Families. In 1994 we moved our celebration to October to coincide with the annual Hispanic/Latino month events and renamed it the Viva La Familia Fiesta, which continues as an annual event produced at a Southern California historic site.

California incorporation became our next challenge. The State of California rejected our paperwork, because the national GSHA’s bylaws had no provision for “branches” or chapters. Finally in 1996 we became incorporated in the State of California. At the same time our branch, in alliance with the Pueblo branch, lobbied for changes to GSHA’s bylaws. When GSHA-SC hosted the 1997 GSHA Annual Meeting & Genealogical Conference in Long Beach, California, the revised bylaws were adopted, and GSHA officially became a national organization. The “branches” in Southern California, Pueblo and Trinidad, Colorado were now chapters! This set in motion events in 1998 which resulted in first, the formation of two new chapters in the Denver area and then in 1999 the reorganization of those chapters into two organizations separate from each other and separate from GSHA. Sometimes bigger isn’t better. GSHA-SC also experienced a “fall-out” from the re-organization. A minority of our members wanted our Chapter to also separate from GSHA, but the majority prevailed and we are still a chapter of GSHA.

In 2000 we moved our meetings, sales books and reference library to the SCGS family research library in Burbank. Financial security is always a concern and in 1993 the Chapter began selling books at meetings and outreach events. Today we sell 15+ titles that are self-published by the Chapter but are phasing out the revolving titles that we resell from other publishers. In 2007 under the leadership of President Doug Daniels, the board compiled a list of goals and priorities, and published a policies and procedures manual.

Our most successful outreach activities are the monthly research days at three libraries in Los Angeles County and our Genealogy Garage workshops held in the History & Genealogy Dept. at the Los Angeles Central Library, in partnership with SCGS. This year we proudly launched a research day in San Diego County. These events were created and produced by Donie Nelson.

Our members reflect the multi-cultural mix of Southern California. Although we started out focusing on Colorado and New Mexico research, the majority of members who have joined since 2000 are researching their families in Arizona, California and Texas, plus their 20th C. immigrant ancestors from Mexico. These new members inspire us with their enthusiasm, persistence, and willingness to take on responsibilities within the Chapter. During the last five years more of our leaders have volunteered for national responsibilities as national GSHA board members or on national committees. New volunteers lighten the workload and allow all volunteers to have a life away from GSHA-SC. As my own volunteer duties are lightened, I look back with pride on what we have accomplished, realizing that the Chapter always needs to change to meet new challenges.